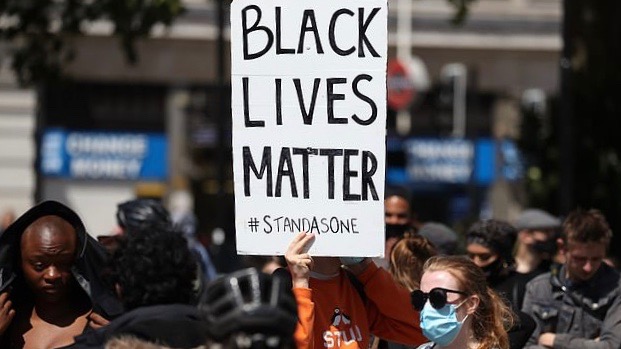 BLM-UK has questioned the British political class’ silence on the proposed Israeli annexation.

Black Lives Matter UK, a coalition of activists in the United Kingdom, on June 28, Sunday, expressed solidarity with the Palestinians and rejected the Israeli plan to annex large parts of the occupied Palestinian West Bank. This annexation, which is in violation of international law, is likely to take place from July 1.

A statement on the official BlackLivesMatterUK Twitter account said, “As Israel moves forward with the annexation of the West Bank, and mainstream British politics is gagged of the right to critique Zionism, and Israel’s settler colonial pursuits, we loudly and clearly stand beside our Palestinian comrades. FREE PALESTINE.” The movement also questioned the British political class’ silence on the issue.

BLM’s tweet received criticism from several prominent Jewish leaders in the UK, including the president of the UK Board of Deputies, who termed it as “beyond disappointing” and of an “antisemitic trope.”

BLM responded with more tweets and quoted well-known African-African academic Angela Davis who said, “From the British Black Panthers to Black Lives Matter, solidarity and learning from Palestinians in the fight against systemic racism has always been part of our shared struggle, and shared strength.”

Israel has stated its intention to annex large parts of the occupied West Bank and the Jordan Valley, starting July 1. It wants to extend its sovereignty to these areas in a bid to recognize all the illegal Israeli settlements built on the occupied Palestinian land.

The settlements have been built in violation of international law and UN resolutions. Under the Geneva conventions, an occupying power is forbidden to annex lands that belong to the people under its occupation. Many also see the annexation plan as a death knell to the two-state solution between the Palestinians and Israel, making the establishment of an independent, viable and contiguous Palestinian state virtually impossible.

Since its formation, the new coalition government in Israel, under prime minister Netanyahu, has declared its intention to proceed with the annexation plan despite concerns raised by the UN and other international organizations. Several countries and groupings, including the European Union and the Arab League, have asked the Israeli government to desist from going ahead with the plan. Palestinians have also been organizing mass protests against the move in the occupied territories.

Black Lives Matter UK is “guided by a commitment to dismantle imperialism, capitalism, white-supremacy, patriarchy and the state structures that disproportionately harm black people in Britain and around the world.”