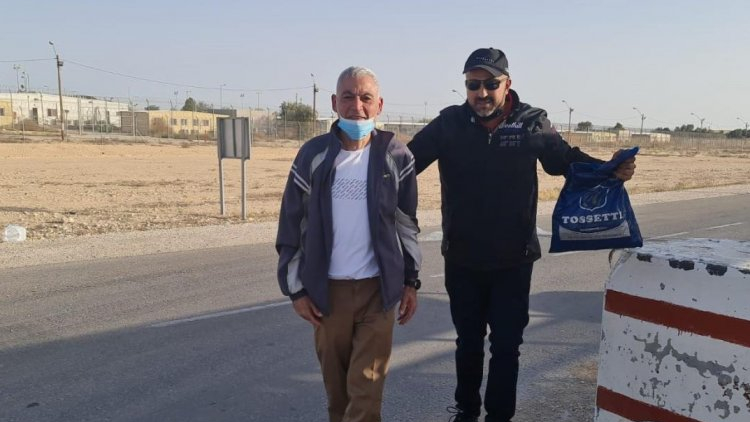 Palestinian prisoner Rushdi Abu Mokh was released from prison after serving a 35-year prison sentence. Abu Mokh was arrested in 1986 and accused of being involved in the kidnapping and killing of an Israeli soldier two years earlier, as well as for being a member of the Popular Front for the Liberation of Palestine (PFLP), a leftist political organization banned by Israel for its resistance to the occupation.

Even as Abu Mokh’s sentence was approaching its end in March, the Israeli authorities did not stop harassing the 58-year-old Palestinian detainee and held him in custody for an extra 12 days for an unpaid parking fine from 35 years ago.

After being released on Monday from the Ketziot prison in the Negev desert in southern Israel, Abu Mokh, visited the graves of his parents and his brother who died while he was serving his sentence, according to media reports.

Palestinian groups such as Fatah and Hamas asked for his release as part of prisoner exchange agreement between the two sides during the peace talks between the Palestinian Authority and Israel in 2013, and again in 2016 during the prisoner exchange deal between Hamas and Israel when the latter had in its captivity Gilad Shalit, an Israeli soldier. Shalit was eventually returned in exchange for 1027 Palestinian prisoners. On both occasions, Israel refused to release Abu Mokh.

A resident of the Palestinian-majority town of Baqa al-Gharbiyye in northern Israel, Abu Mokh was one of the 25 Palestinian detainees that were arrested by Israel before the 1993 Oslo Accords.

Abu Mokh, at the time in his early 20s, was arrested in March 1986 along with three other Palestinians who were accused of murdering Israeli soldier Moshe Tamam. The other three Palestinians are still serving their respective prison sentences. Following his release, the soldier’s family demanded that the interior ministry revoke Abu Mokh’s Israeli citizenship, a demand that is illegal and has no precedent or support in the country’s or international law.

Prisoners’ rights and human rights groups estimate that there are currently about 4,400 Palestinians being held in the various prisons and detention centers inside Israel, which include 39 women and 155 children. Additionally, there are an estimated 350 Palestinians under the illegal, arbitrary ‘administrative detention order’ policy, under which they are held for indefinite periods of time without being formally charged with any offense or facing trial.