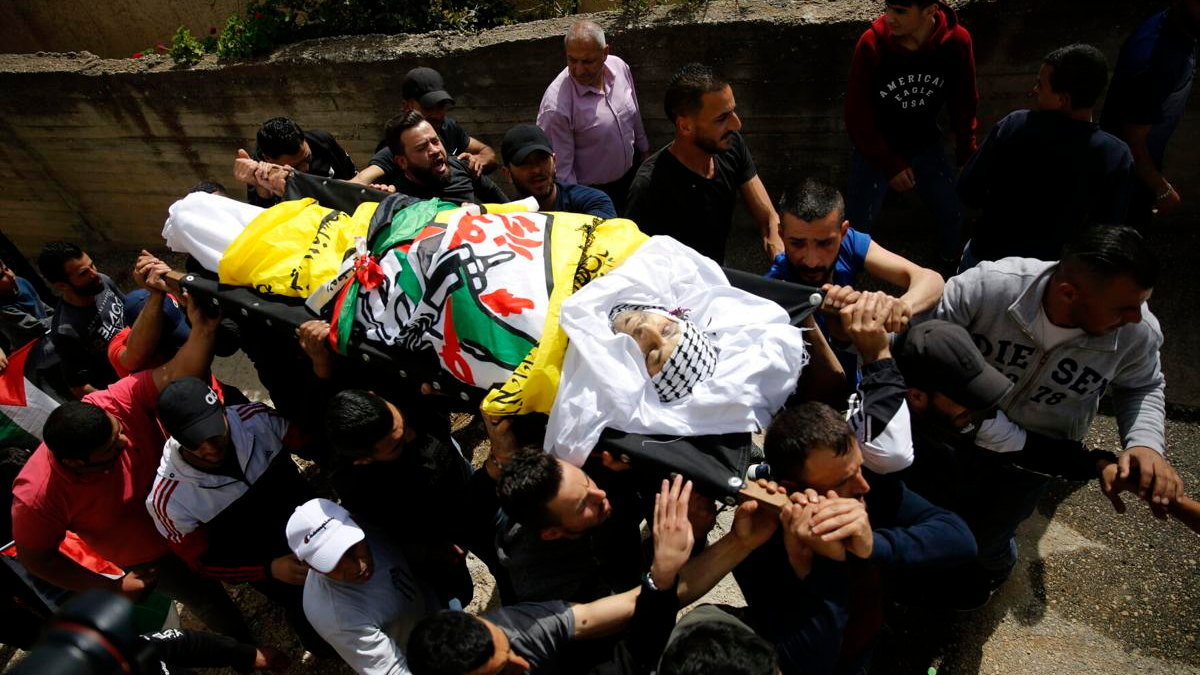 Palestinians carry the body of Osama Mansour during his funeral in the village of Biddu near the city of Ramallah in the occupied West Bank. Photo: Herald Bulletin

A Palestinian-Israeli father of five was on Tuesday, April 6, shot and killed by Israeli army soldiers at a military checkpoint in the occupied West Bank. The incident took place while he and his wife were traveling back home to the village of Biddu, northwest of Jerusalem in the West Bank. The slain Palestinian, identified as 42-year-old Osama Mansour, and his wife, Sumayya, 35, were in their car when they were stopped by Israeli soldiers in early hours of Tuesday at the military checkpoint outside the neighboring village of al-Jib.

According to testimony obtained from Sumayya, Israeli soldiers ordered Mansour to turn the car around and leave after completing a security check. Once they did so, the soldiers opened fire, fatally wounding Osama, while Sumayya escaped with minor injuries. Osama was pronounced dead at a hospital in Ramallah.

In the aftermath of the incident, the Israeli military released a statement in which it said that the couple attempted to commit a car-ramming attack, a claim that was emphatically refuted by Sumayya as well as other eyewitnesses. Imran Mansour, Osama’s cousin, questioned the logic and credibility of the claim that a father of five children would try to commit such a crime with his wife in the car, particularly after complying with all the orders of the soldiers – having given them the couple’s IDs, and let them search the car. Terming the Israeli claim as ‘ridiculous,’ he said the reality is that “Osama was killed in cold blood, and the soldiers who killed him will never be held responsible,” and Israeli courts will “protect their soldiers at all costs.”

Other witnesses also told Palestinian Wafa News Agency that the soldiers threw a stun grenade towards the car as it was leaving, which led to Osama increasing the speed of the car to try and avoid any damage or injury from the grenade, following which the car was fired upon indiscriminately by the soldiers.

Tuesday’s killing bring back into focus the recent spate of such killings by Israeli security forces. These include the shooting of an autistic youth, Iyad Hallaq, and the murder of a young Palestinian named Ahmed Erekat on the day of his sister’s wedding.

The Palestinian Authority in a statement condemned the killing as “atrocious” and “just one in a long and ongoing series of extrajudicial executions” committed by Israeli security forces.

The regular occurrence of such incidents and the impunity and protection that the guilty soldiers enjoy from the Israeli government and judicial system has led human rights groups, international organizations such as the United Nations, European Union, as well as world leaders, to demand that Israel prosecute and punish those that are guilty of these crimes against Palestinians.