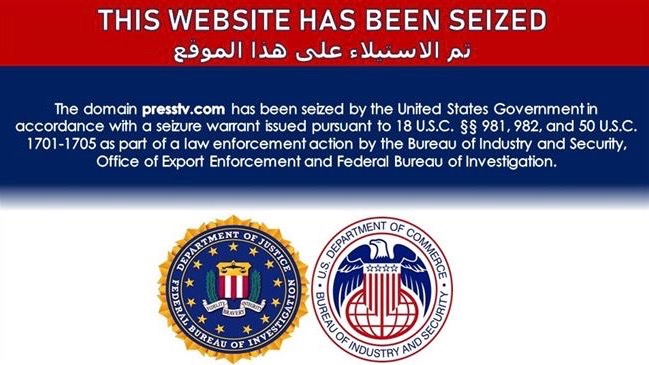 On Tuesday, June 22, the US government “seized” several news websites, alleging their involvement in spreading “disinformation” and calling them a “threat to national security”. The seized websites include Iranian state-owned Press TV and its Arabic version Al-Alam, the Houthi controlled Al-Masirah TV, and Palestine Today, among others. The move has created global outrage with activists calling it an attempt to censor the press and detrimental to the ongoing talks in Vienna.

Visitors of Press TV and the other Iranian and regional websites can now see a notice which mentions the “seizure”. The notice cites certain US sanction laws and demonstrates the seals of the US department of justice and department of commerce.

In the absence of an official statement, there was speculation that these sites may have been “hacked.” However, AP quoted the US justice department as saying that the websites were taken down due to their “efforts to spread disinformation and sow discord among American voters ahead” of last year’s presidential elections.

The US seizure has affected Press TV’s domain names .com and .net, which are owned by US companies. Press TV is available under the domain name .ir.

Several commentators have condemned the US move as an attempt to censor unfavorable content and termed it an assault on the freedom of press. Talking to Press TV, journalist Tim Anderson called the move a terrible blow to the integrity of a shared internet, saying that the US is acting as if it owns the internet. He also argued that this move shows that the US is disturbed by Iranian and other international media questioning the its propaganda in West Asia and other regions, and its wars in the region, leading to loss of its credibility.

Seizure of Iranian websites shows that Washington is deeply disturbed by the credibility of the Iranian media, says Tim Anderson. pic.twitter.com/CIV3e9e7vE

Some also see the move as a deliberate provocation and a U-turn in the Joe Biden administration’s commitment to make peace with Iran.

WTF??? US government SEIZES website of Iran’s Press TV, and 2 other media outlets—one Iranian and one belonging to the Houthis in Yemen. I thought Biden was trying to make peace with Iran??? https://t.co/MDdRW9JUDg pic.twitter.com/aLDsO0sVOW

Press TV, Iran’s state media agency, is an English news channel controlled by the Islamic Republic of Iran Broadcasting (IRIB) and launched in 2007. Al-Alam, its Arabic and Farsi version, was established in 2003.

Al-Masirah, based in Beirut, Lebanon, issued a statement condemning the US seizure and said that the move is not surprising “as it comes from those that have supervised the most heinous crimes against our people.” It claimed that the “ban reveals once again, the falsehood of the slogans of freedom of expression and all the other headlines promoted by the United States of America, including its ability to confront the truth.”

STATEMENT BY #ALMASIRAH MEDIA NETWORK ON THE CLOSURE OF ITS WEBSITE BY THE US FEDERAL BUREAU OF INVESTIGATION:

"We in the Almasirah are not surprised by this decision, as it comes from those that have supervised the most heinous crimes against our people". pic.twitter.com/YFB1UGuRXj

This is not the first time that the US has attacked Iranian media. The previous Donald Trump administration in the US had seized over 100 domains in October 2020 claiming that they were used by the Islamic Revolutionary Guards Corps (IRGC) for a “disinformation campaign”. Press TV, which has not issued any statement on the seizure yet, has in the past alleged recurring attacks by tech giants Google and Facebook on its YouTube channel and Facebook page citing vague “community standards’.

The latest seizure has also led to growing concerns of escalation in hostilities between the US and Iran, particularly after the election of the new Iranian president Ebrahim Raisi, who is considered a hardliner. It also goes against the promises made by the Biden administration immediately after coming to power to end the hostilities and go back to the Joint Comprehensive Plan of Action (JCPOA) or the Iran nuclear deal signed in 2015.

The Trump administration had unilaterally withdrawn from the deal in 2018 and imposed sanctions against Iran leading to a deterioration in relations. The Biden administration has been participating in indirect negotiations in Vienna to find a way out of this stalemate created by Trump. Only last week, both the parties had claimed that a deal had been reached after six rounds of talks to lift the sanctions with Iran returning to compliance under the JCPOA provisions. Press TV reported on June 22 that despite the agreement, the US is reluctant to lift all sanctions against Iran.