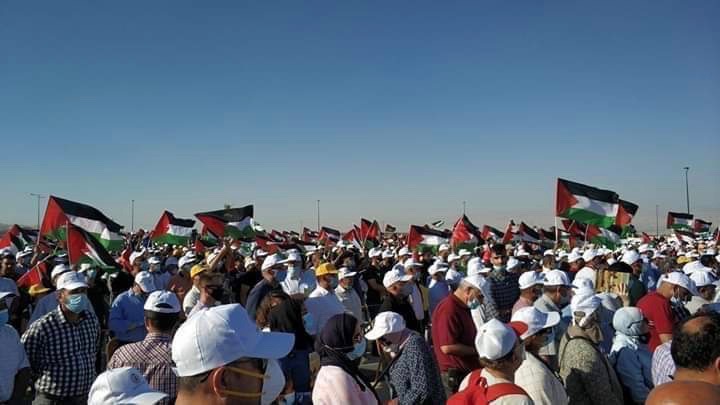 Palestinians have been organizing several protest demonstrations against the Israeli annexation plan.

On June 24, Wednesday, United Nations secretary general António Guterres, asked Israel to desist from going ahead with its proposed annexation of large parts of the occupied Palestinian West Bank as the move could “grievously harm the two-state solution.”

In a virtual meeting of the United Nations Security Council (UNSC), Guterres said, “If implemented, annexation would constitute a most serious violation of international law, grievously harm the prospect of a two-state solution and undercut the possibilities of a renewal of negotiations. I call on the Israeli government to abandon the annexation plan.”

The new coalition government in Israel headed by prime minister Benjamin Netanyahu announced last month its plan to start the annexation of areas of illegal Israeli settlements as well as the Jordan Valley in the occupied Palestinian West Bank. The Netanyahu government has claimed that these areas are earmarked for Israel as per the so-called “plan of the century” proposed by US president Donald Trump in January.

Palestinians and most of the international community have rejected Trump’s plan as unilateral and heavily biased towards Israel. The Palestinian Authority (PA) and other Palestinian groups have warned that annexation will lead to large scale uprisings. The PA has also announced its decision to end all coordination with the Israeli government.

Meanwhile, over a thousand parliamentarians from more than 25 European countries signed a joint letter calling on Israel to desist from its plan to annex the occupied territories.

Speaking from his office in the occupied East Jerusalem, UN special envoy for the Middle East, Nikolay Mladenov said that “recognizing that both peoples have a right to live in their ancestral home, 27 years ago Israeli and Palestinian leaders agreed to embark on a noble but difficult road, to resolve the conflict through negotiation, without taking unilateral action, and in order to reach a final status agreement on a just peace.” He also emphasized that the unilateral move by Israel will take “us further than ever from that goal”.

Palestinian foreign minister Riyad al-Maliki also spoke at the UNSC meet on Wednesday and asked the international community to impose sanctions on Israel if it goes ahead with the planned annexation.