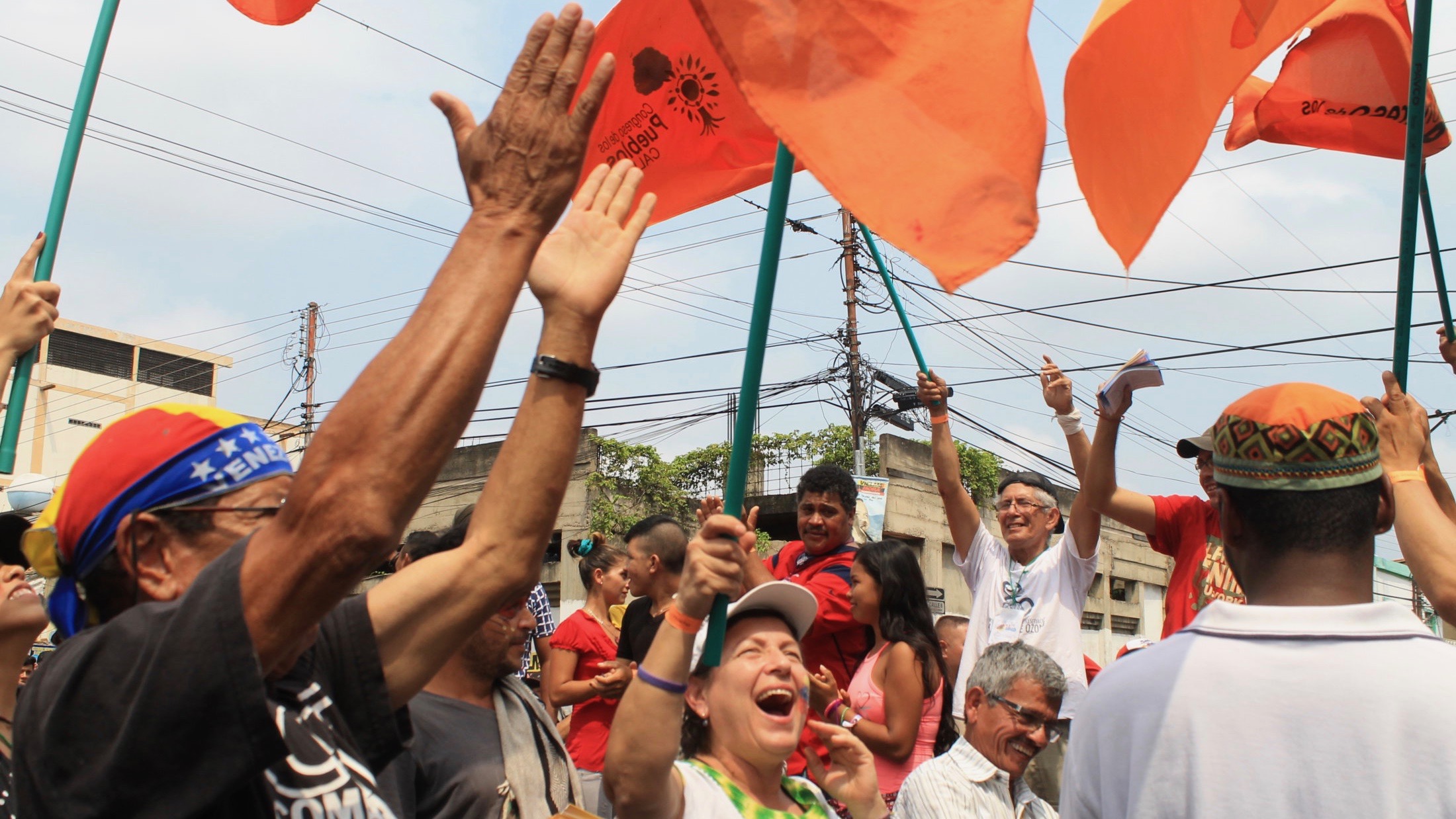 From a "Hug-a-thon" organized during the "Uniting people for peace" festival in March 2018 where 2,000 people from movements and organizations in Colombia and Venezuela gathered to celebrate the unity of the people and reject efforts by the elites to divide them. Photo: Colombia Informa

Last year, on November 21, the Colombian people took to the streets in massive numbers to reject the policies of the government led by President Iván Duque. In particular, the people called on the government to withdraw two policies.

First, the people wanted the right-wing government of Duque to advance the 2016 peace accords between the government and the left-wing FARC (Revolutionary Armed Forces of Colombia). These accords, negotiated in good faith, would have ended a war that has lasted for six decades; 70 percent of Colombian society has been born during this war.

Second, the people wanted to end the harsh austerity policies driven by Duque’s government, which includes cuts to public universities, cuts to the pension system, and cuts against broad social spending. The main trade union federation—Central Trade Union of Workers in Colombia (CUT)—called for that protest, which then broadened into a mass uprising against Duque and the system of Colombian politics.

The general secretary of CUT and spokesperson of the People’s Congress, Edgar Mojica, was on the barricades daily, helping shape the mass upsurge that suggested that Colombian society no longer wanted to be held hostage to the whims of its sclerotic oligarchy and to the United States government. This was the mood. It was clear in the slogans and graffiti that emerged in Bogotá, the capital of Colombia, and then outwards to its smaller cities and towns.

The two demands—for the peace accords and to end austerity—are related. The Colombian oligarchy fears that if it makes a full peace, the arrival of FARC onto the political stage will strengthen the left, and a stronger left will have the power to annul not only the austerity agenda but also the pro-U.S. orientation of the ruling classes of Colombia (for more on this, see the Tricontinental: Institute for Social Research dossier no. 23, December 2019).

The other left organization—the National Liberation Army (ELN)—has in good faith tried to negotiate with Duque’s government, but has seen the door slammed in its face repeatedly, as Pablo Beltrán, an ELN leader, told Claudia Korol last year. Duque has intensified the military campaign against the ELN.

If the peace accords with FARC and the talks with ELN deepen, it would undermine the power of the oligarchy and of Washington. As Olimpo Cárdenas of the People’s Congress (Congreso de los Pueblos) told one of us two years ago, “There is a sector of the Colombian oligarchy that benefits from the war.”

There are days when it seems as if President Ivan Duque cannot make a decision without consulting the U.S. government and his mentor, Álvaro Uribe. The advice he gets is to burrow deeper into an alliance with the United States, even at the cost of public opinion in Colombia. It would be fitting to call Duque’s policy toward the United States a doormat policy, a policy where he offers Colombia as the doormat for the United States to wipe its feet before it marches into neighboring Venezuela.

When we spoke to Mojica recently, he said, “The Colombian government is a submissive government. It is inclined toward the decisions of the North American government.” This is not a new development. What is indeed new, Mojica says, is that Duque has done everything to facilitate both the blockade against Venezuela and the potential military intervention into Venezuela.

When the North Americans (Canada and the United States) urged their partners in Latin America to create a platform against Venezuela, which became the Lima Group in 2017, Colombia was an eager participant. In February 2019, Duque welcomed the Lima Group to Bogotá in the midst of a high-stakes gamble by the United States to overthrow the Venezuelan government of Nicolás Maduro. In January of that year, the U.S. picked an obscure Venezuelan politician—Juan Guaidó—to be their puppet, and they intensified the hybrid war against Venezuela.

At that time, Mojica and other social movement leaders criticized the way their country was being used by the Colombian oligarchy and the United States for narrow purposes, against the interest of the Colombian people. Mojica told us, “We have been denouncing this for the past year, beginning when President Duque lent himself to legitimize Guaidó and to legitimize the positions that the Lima Group has had with respect to Venezuela.”

Heightened military tension with Venezuela suits the Duque government’s agenda. It means that it can put off any talk of full implementation of the peace accords and it can cast aside any criticism of its austerity policies. Since 2016, hundreds of social movement leaders have been assassinated across Colombia; this violence is obscured by the attention being paid by the media to the Colombian-Venezuelan border.

With the U.S. government now absurdly saying that Venezuela is the source of narco-trafficking, even though all evidence pointing to narco-trafficking is rooted in Colombia, the pressure on Colombia to deal with its drug problem is now lifted; indeed, the intimate links between the oligarchy and the narco-traffickers is now hidden by the hallucinatory claim that Maduro is himself involved in this trade.

When Duque was in the White House on March 2, he sat beside Trump and with very servile language told the U.S. president that he would begin once more to spray the Colombian countryside with toxic chemicals as a weapon against cocaine production. Based on a World Health Organization study, the Colombian government stopped using glyphosate-based fumigation sold to it by Monsanto in 2015.

Last year, the Colombian constitutional court said that such spraying should not be allowed unless the government meets certain requirements, including monitoring health conditions of the peasantry on the ground; this standard is seen to be very stringent and impossible for the government to meet.

Mojica told us that the entire narco policy is a “distraction” because it fails to grasp the real problem. “We reject the policies of crop dusting and policies of blackmailing the Colombian government because the production by small farmers in Colombia is the weakest link in the chain,” he said. These small farmers whose farms and bodies will be saturated by toxic chemicals are not the main concern of Duque’s government.

The main element is the large Colombian narco-cartels that traffic the drugs through Mexico and Central America to North America, the drug mafia in North America itself, and the immense demand by consumers for South American cocaine. None of them face the brunt of the drug eradication policy.

“The coca growers and their families,” Mojica said, “are not presented with any alternative in terms of financial support for eradication of their crop.” They have unfairly become the frontline of the war.

The 2016 Havana peace accords did provide a mechanism to assist farmers in transitioning from the cultivation of illicit crops. However, as with much else in the peace process, the protocol has not been respected; peasant communities have repeatedly denounced incidents of forced eradication by the army. Assassination of leaders of these communities are often carried out by the paramilitary groups, the cartels, and a section of the armed forces known as the Public Force (Fuerza Pública).

The United States and the Duque administration, Mojica says, are using the question of drugs to move an agenda for regime change in Venezuela. Matters are so grave that the Colombian government has allowed U.S. troops to enter its territory—both on the Caribbean coast and on the Venezuelan-Colombian border, such as in the area of Catatumbo. “We think that from there they are preparing a land invasion,” says Mojica.

Indeed, the U.S. has sent a carrier group into the Caribbean and has troops prepared to amass at the Venezuelan-Colombian border. These are tense times, with the possibility of military maneuvers turning into a war imminent.

The Senate, as Mojica notes, has been vocal in its opposition to the use of Colombian territory to destabilize Venezuela. In April, a group of Colombian congressmen wrote a public letter to Duque saying that their country must not participate in regime change in Venezuela. If Duque wants to pursue any such agenda, he has to seek permission from the Congress.

Mojica told us that the Colombian social movements “completely reject” Trump’s agenda. “We are not its backyard,” he said of the United States, and therefore not its doormat either. “We do not condone its anti-drug policies; we do not condone its policies of looting our natural resources and our environment.”

Paola Estrada is in the Secretariat of the International Peoples Assembly and is a member of the Brazilian chapter of ALBA Movements (Continental Coordination of Social Movements toward the Bolivarian Alliance for the Peoples of Our America).

Ana Maldonado is in the Frente Francisco de Miranda (Venezuela).